I have fought the good fight, I have finished the race, I have kept the faith. – 2 Timothy 4:7 (NIV)

Call me crazy, but I tend to make important life decisions from what I call “the deathbed perspective.” I imagine myself on my deathbed, looking back on my life. At the end of my earthly sojourn, would I regret this decision or rejoice I chose to go that route?

In his second letter to the young pastor Timothy, the apostle Paul also had a deathbed perspective—and it truly was his deathbed. He was in his last days on earth—imprisoned in a cold dungeon, chained like a common criminal, alone, as he awaited his martyrdom.

Here he penned the words I told my husband I wanted on my tombstone: “I have fought the good fight, I have finished the race, I have kept the faith” (2 Timothy 4:7).

But those aren’t just words to die by—they’re words to live by.

This week we’re going to look at the first part of that verse: I have fought the good fight.

This tells me the Christian life is a battleground not a playground.* (See “For Further Study” below) The life of faith is a fight because faith doesn’t come easy and it doesn’t grow easily.

As believers we are in a war with God’s infernal enemy** (See “For Further Study” below), and we do battle daily in three arenas of warfare: the world, the flesh, and the devil (yes, he does exist).

The second arena is the flesh—our human, or carnal, nature, prone to sin, which is constantly at war with our spiritual nature (John 3:3; Romans 7 & 8; 1 Corinthians 2:6–14). Just look at the temptations to sin you face daily. This war will rage until our spirits are freed from our earthly bodies.

The third arena is the devil. When you receive Jesus as your Savior, you immediately switch sides in a war that goes back to Lucifer’s rebellion in heaven (Isaiah 14:12–15; Ezekiel 28:11–19; Luke 10:18). The enemy has been prowling around ever since, seeking the destruction of believers (1 Peter 5:8). 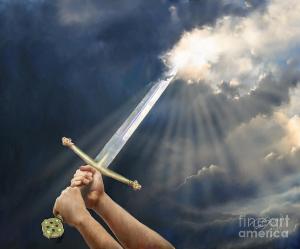 But we are not left without weapons.

First, put on your armor (Ephesians 6:10–18). After all, why would the Word advise us to put on our armor if we weren’t to do battle?

Third, know God’s Word. It is your sword (Ephesians 6:17). Learn to use it and use it often and well.

Finally, remind yourself that the war is already won. It was won when the Son of God died in your place on a Roman cross then burst out of a sealed tomb three days later. Don’t believe me? Read Revelation.

I know, there are times you feel anything but a victor. You feel beaten, weak, small, forgotten, and alone.

But you’re not. Remember these verses:

Remind me, Father God, I’m in this world not to frolic but to fight the good fight of faith. Help me to use my weapons often and well. Amen.

NOTE: Next week, we’ll look at the second part of that verse: “I have finished the race.”

*”In the early days (of the founding of America), when Christianity exercised a dominant influence over American thinking, men conceived the world to be a battleground. Our fathers believed in sin and the devil and hell as constituting one force; and they believed in God and righteousness and heaven as the other. These were opposed to each other in the nature of them forever in deep, grave, irreconcilable hostility. Man, so our fathers held, had to choose sides: he could not be neutral. For him it must be life or death, heaven or hell, and if he chose to come out on God’s side, he could expect open war with God’s enemies. The fight would be real and deadly and would last as long as life continued here below. . . .

“How different today: the fact remains the same but the interpretation has changed completely. Men think of the world, not as a battleground but as a playground. We are here not to fight, we are here to frolic. We are not in a foreign land, we are at home. We are not getting ready to live, we are already living, and the best we can do is to rid ourselves of our inhibitions and our frustrations and live this life to the full. This, we believe, is a fair summary of the religious philosophy of modern man.”

** “You have also established a new relationship with the powers of darkness. Whatever you were before you became a Christian . . . you are now a sworn foe of the legions of hell.

“Have no delusions about their reality or their hostility. But do not fear them. The God inside you terrifies them. They cannot touch you, let alone hurt you. But they can seduce and they will try. They will oppose you as you obey Christ. If you play it cool and decide not to be a fanatic about Christianity, you will have no trouble from them. But if you are serious about Christ being your Lord and God, you can expect opposition. . . .

“You may have periods of darkness or of doubt. You may encounter painful struggles and discouragement. But there will also be moments of exultation and glory. And most important of all, you will become free.”

In the morning, O LORD, you hear my voice; in the morning I lay my requests before you and wait in expectation. — Psalm 5:3 (NIV)

My Bible study assignment was unique. I was to get up before dawn, take my Bible (and my cup of tea, of course), and sit in a chair outside facing the east. There I was to “lift up the day’s needs as the light begins to dawn and the sun rises,” then read assigned Scriptures (noted below in “Extra Tea”).

Because I live in the North (and the Bible study writer lives in Texas), spending time outside at that time of the day during this time of the year would not be good for these old bones.

So just before the sun came up over the wooded hillside behind my house, I parked myself in a rocking chair—inside—beside the dining room window facing west. While I didn’t see the sun actually rise, I watched its light, a sliver on the horizon at first, creep closer and closer to my house, blanketing field and forest, brightening up the dull pre-dawn landscape.

As I lifted up the day’s needs—there were plenty, including a situation heavy on my heart—I pulled out an index card on which I’d written Philippians 4:6–7: “Do not be anxious about anything, but in every situation, by prayer and petition, with thanksgiving, present your requests to God.”

And then, between verses six and seven, a still, small voice interrupted: “What is your request?”

“Stop trying to be so spiritual,” I heard the gentle voice chide. “Tell Me what you really want.”

Did I even know what I wanted anymore?

I’m still sorting through the fallout, seeking what it is that I truly want and the courage to voice it. To put into words the feelings and desires I’ve been stuffing into a corner of my heart and soul. A corner now so full, what it contains is beginning to leak out.

Why had I stuffed it? Because I was afraid my true feelings and desires were sin. So instead of confessing, talking it over with God, who knows me better than I know myself, I hid it away. (See Psalm 32)

What’s the result of honestly presenting our requests to God?

“The peace of God, which transcends all understanding, will guard your hearts and minds in Christ Jesus” (Philippians 4:7).

I’d like to challenge each of you, dear readers, to do this: Get up before dawn, take your Bible and cup of tea or coffee to a place where you can see the sun rise, read His Word, then lift up the day’s needs to your Father in heaven.

Help me, Father, to always be honest with You. Only then can we work together to weed out what’s hurting me and replace it with Your peace. Amen.