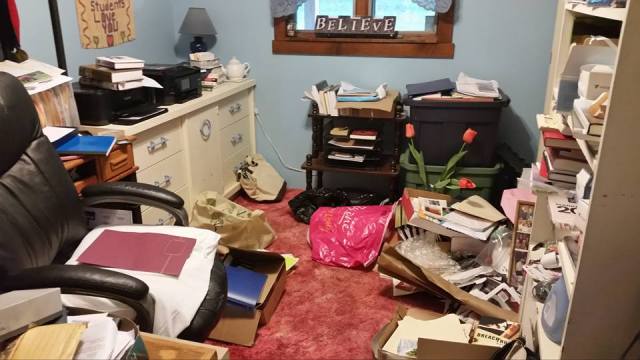 Have you ever started a project with gusto, then quit when it became too hard to complete? Or perhaps you ran into unexpected roadblocks and got tired of fighting. Or maybe the task was too tedious. Or became more expensive than you’d originally thought it would be.

But for whatever reason, the project was abandoned. Our attics, garages, and spare rooms are filled with unfinished projects.

Take my study, for instance. It’s amazing how quickly it becomes disorganized, overrun with paper, books, documents, and other stuff I plan to look at “sometime.” It’s not a hard job—sorting through the papers and documents—just tedious.

At the beginning of August I couldn’t take it any longer and delved into the stacks, boxes, and drawers. I spent an entire Saturday going through a large box of files, some dated as far back as 1993—most of which were pitched. By the end of the day, a stack of garbage waited by the door to be hauled away.

Sad to say, but it’s mid-November and I’ve only gotten back to it. Maybe by the end of the year I can cross this project off my to-do list.

I don’t know about you, but an unfinished project bothers me. It may be out of sight, but it’s definitely not out of my mind. I can avoid it so long then I have to get back to it.

Some of my projects are ones God has called me to. Like writing. I began the second book in a mystery series earlier this year, ran into roadblock after roadblock, lost my enthusiasm for the story, and quit. I’ve started two other stories I haven’t finished. Lately I sense God nudging me to get back to them.

Unfinished projects—even the ones God gives us—aren’t anything new.

The Jews returning to Jerusalem after the exile in 538 B.C. also had an unfinished project they were forced to deal with. They were supposed to rebuild the temple but worked on it only two years, setting the foundation, before they ran into opposition, became discouraged, and quit. After giving them 14 years to get back to it, God finally sent the prophet Haggai to stir them up again. They heeded God’s message, got back to work, and finally finished the temple five years later.

As I read this short Old Testament book, I saw three things we can expect when God gives us a project.

First, expect sacrifice and hard work. Sometimes what God calls us to do isn’t easy or convenient. But obedience isn’t an option for the believer.

Second, expect opposition. When you’re obeying God, His infernal enemy will do all he can to thwart you, discourage you, frustrate you, make you inefficient and your efforts ineffective. Just remember: The battle is not yours, but God’s (2 Chronicles 20:15). So don’t be discouraged or afraid. Do what you were called to do. You work. Let God fight.

And finally, expect a blessing. Especially the blessings of His presence and His Spirit, who will give you the strength and courage to complete the task.

Forgive me, Father, for abandoning the work You’ve called me to do. Give me the strength and courage to get back into it so You can fulfill Your purpose through me (Psalm 138: 8). Amen.

Extra tea: Read and meditate on the book of Haggai