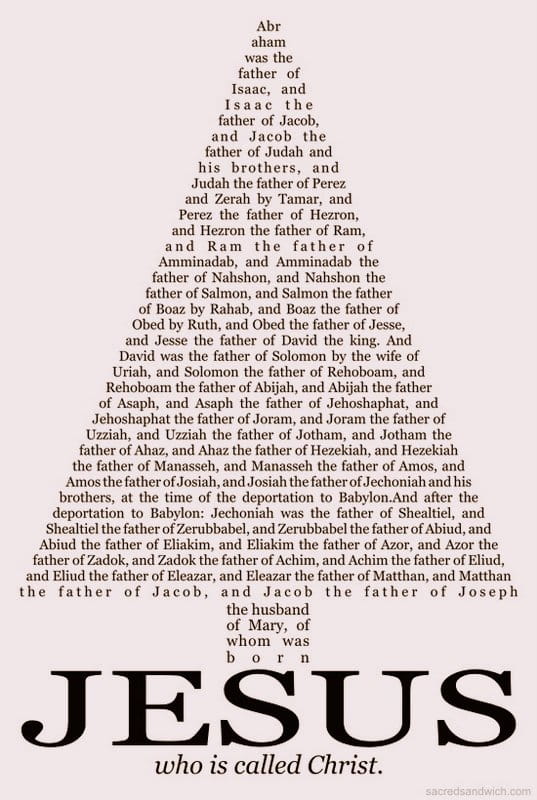 Rahab was a prostitute from Jericho and not an Israelite. Neither was Ruth, King David’s great-grandmother. She hailed from Moab—Israel’s one-time enemy, a nation birthed in incest, whose bloodline traced back to Lot, who slept with his own daughters. Then there was the shrewd and persevering Tamar, whose twins were begotten in deceit.

Another interesting note in the genealogy Matthew recorded is that he included women. It was unusual for women to be listed in Jewish genealogies. Matthew, however, lists five: Tamar, Rahab, Ruth, Bathsheba, and Mary. Only two were Jewish. Three bore moral blots.

Over the next few weeks, we’re going to look at the stories of these five women, the role they played in Jewish history, and what it means for us today.

Everything in God’s Word has a purpose—even the accounts of unsavory characters whom God chose to fill a slot in the ancestry of His own Son.

What’s the message you see in this? That God doesn’t choose only men to fulfill His purposes? That allowing far-from-perfect men—and women—a part in His plan to save sinners is still more evidence of His amazing grace? Nobody’s perfect, but surely there were people with better moral records than these. That God makes good on His promises, even one made 4,000 years before it was fulfilled?

Relief that I don’t have to be perfect—God can use me warts and all. And freedom from guilt that my past indiscretions will cause me to miss out on God’s purpose for me.

Read and reflect on Matthew 1.

LOOKING FOR SOME RELEVANT, INSPIRING ADVENT READINGS? CHECK OUT GOD, ME, & A CUP OF TEA FOR THE SEASONS. Available in paperback and Kindle editions. Click here to get your copy.